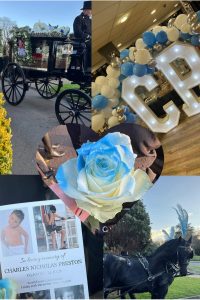 Well it’s taken a while to write this one, on the 10th December 2021 we had Charlie’s Cremation.

It was such a hard day for everyone from his Mum & Dad, Family and Friends.

Charlie’s friends and Alfie were amazing, they carried Charlie’s coffin with such dignity and pride.  Their tears were so sad to see, but so genuine.

Charlie’s dad Nick stood up and said they most beautiful words, how he did that I will never know? But Nick put his grief aside for a few minutes and sent his son on his way to heaven with the most loveliest of words.

Kirsti and the children held their own, and their were so many people who attended to say goodbye.

It was such a sad day, but Kirsti & Nick could not have given Charlie any better send off.

Now once again our family have to try to move on, it will be so hard for Kirsti & Nick and my sister Trudy, and to be honest all the family will mourn this lost for a long while.

Everyone grieves different, but I do know grief and it is not going to be an easy road for everyone to travel.

On the 21st December 2018, I lost my husband. He was diagnosed with Pancreatic Cancer on the 17th September 2018 and was gone forever 12 weeks later. My heart was broken and my life changed forever, I will never be the same person again.

© 2023 Coping With My Grief — Powered by WordPress

Theme by Anders Noren — Up ↑