Service Of Remembrance (Saturday 18th May 2018)

When i received the letter inviting me to the above I was in two minds weather to go, but because they were mentioning Terry’s name I just had to go. My friend Denise came and i must say it was lovely. The priest remembered Terry and laughed with me about how he wouldn’t talk about religion. The priest said it didn’t matter they had nice chats anyway.

The service was lovely and of course I had a cry. A lady sat next to me who was by herself and she was really upset. Her husband had passed on the 18.12.18 in the hospice, so he and Terry were in the hospice at the same time. At least Terry got to pass at home, that was his wish. He worried about that through it all.

We held hands through the service, and had tea and cakes after, she told me her story. It helped me because it makes you realise there are other people going through the same emotions and feelings. Everything she said she felt and did, was the same as I had felt and still going through.

So I am really glad I went and feel it brought me a little bit of peace.

Thank you for coming with me Denise. 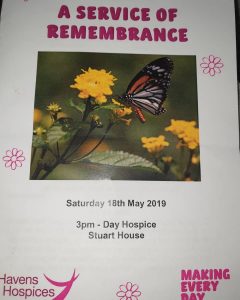 Havens Hospice A Service Of Remembrance

On the 21st December 2018, I lost my husband. He was diagnosed with Pancreatic Cancer on the 17th September 2018 and was gone forever 12 weeks later. My heart was broken and my life changed forever, I will never be the same person again.

© 2022 Coping With My Grief — Powered by WordPress

Theme by Anders Noren — Up ↑